Anyone who has been on a tall mountain, or a lookout tower, or even on a plane during takeoff will know the instinct to search for one’s own house and if you have ever successfully spotted it you surely know the excitement of doing so. That is exactly how I felt when our class was first introduced to the Tokugawa Map Collection of the UBC Rare Books and Special Collections and they laid out four different maps of Kyōto from the 19th century. I used to live in Kyōto for a year as part of my Japanese studies so naturally I felt the urge to see if I could find my house in the neighbourhood of Narutaki on them and loudly proclaimed to everyone in childish excitement when in fact I managed to locate it on every single one of these maps. That is when I knew I had found the topic for this blog post. 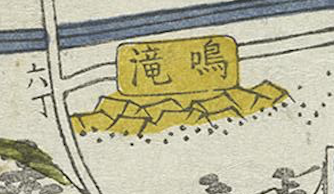 My neighbourhood of Narutaki in the two maps of Kōto. If you have read any of my fellow-researchers’ posts or seen any of the maps of larger Japanese cities they have discussed, you will surely notice that Kyōto stands out in terms of its structural layout. To the average North-American reader, it probably resembles a North-American “checkerboard”-style city more than any other larger Japanese city. The reason for this stands obviously in no relation to North-America though, as Kyōto was constructed in the year of 794, after it has been chosen as the new capitol of Japan due to a religious-political scandal in the previous, short-lived capitol of Nara forcing a “fresh start” in a different place. In fact, the reason Kyōto looks this way is because it has been modelled directly after the capital of Tang China, Chang’an, with the royal court (Nijō Castle in the case of Kyōto) being located at the centre top of the city and the numbered avenues descending horizontally from the court representing a decline in social status for the residents.

These two maps have 56 years separating them, however, looking at the city of Kyōto as depicted in both of them, there doesn’t seem to be much change at all, no notable ones at least. They even span roughly the same area. The styles of cartography don’t seem to have changed much either. Unlike the first map, the second map has its focus on presenting “famous places”, the so-called meisho (all of which still exist to this day and continue to make up popular tourist destinations) which explains the numerous pictures of said places around the map, however, that is a difference in purpose of the maps and not in cartographic methods. Those remain largely unchanged, they both use symbols of trees, mountains, and temples, have descriptive writing on key buildings and locations, and they both indicate buildings of the inner city by coloured squares, grouping them in “blocks”. Further research didn’t show any meaningful pattern in the colourization of buildings and a legend is not provided in either map, furthering the assumption that there is no significance in colour choice. It is exactly the colour, however, that makes for the biggest and most interesting contrast between these two maps. Looking at the maps side by side, the second one figuratively jumps at one with just how much bright pink is applied all over it. It resembles a middle schooler trying out their new pink highlighter more than a revised and highly detailed guide to locations in the old capital of unspeakable historical, spiritual, and political significance. Unfortunately, the digital version of the second map even has its brightness decreased in comparison to the physical original which is even much brighter and flashy. So while extensive use of colour was a common practice in both maps (as well as other Japanese maps), it is the quality of the colour that appears to have changed significantly in the five decades between 1831 and 1887.

Any student of Japanese history surely already noticed that a historically immensely significant event happened in between the issue of these two maps, namely the Meiji Restoration in 1868. Up until that point, Japan remained in seclusion under the shogunal issue of sakoku (lit. closed country). With the Meiji Restoration, however, came not only the opening of the country to the West but also a heightened awareness of the need to modernize and adapt Western technologies as well as stimulate the economy. One of the industries that was made possible to advance under these circumstances was that of synthetic dyes. Up until this point, Japan mostly used natural dyes such as indigo for blue, safflower for yellow, thistle petals for red, and so on (Parmal 2004, 398; Cesaratto et al 2018, 2; Whitmore and Cast 2013, 30). It was already roughly a decade before the Meiji Restoration that a foreign owned firm for textile dyes opened in Kyōto in the year 1859 and one of the dyes that this firm brought into Japan was the synthetic Aniline dye, invented by William Henry Perkin in Great Britain in 1856. This dye was originally purple but expanded to be available in the colours pink, red and even green as well, and between all these colours it shares one key characteristic: the neon-esque brightness (Parmal 2004, 399). So bright in fact that later works of Japanese artists such as Utagawa Hiroshige’s 1874 woodblock print “Scenic View of Tokyo Enlightenment: Prosperity of Brick and Stone Shops on Both Sides of Ginza Street” have been criticized by Japanese and non-Japanese alike as being too “garish” (Cesaratto 2018, 1) or “not elegant” (Mihara 1943, 245).

“Scenic View of Tokyo Enlightenment: Prosperity of Brick and Stone Shops on Both Sides of Ginza Street” by Utagawa Hiroshige, 1874.

The fact that Aniline dye was not only far more expensive than other dyes but also initially purple, a colour which is associated with wealth and power in Japan, caught the eyes of many of the social elite in Japan and so it quickly grew in popularity, further boosted when a famous dyer by the name of Izutsuya Tadasuke began using it (Parmal 2004, 399-400). It was only thanks to the growth of the economy as well as international trade during the Meiji that Aniline dye left this small elitist circle and could be used for a wide array of products, ranging from kimonos to woodblock prints and maps such as the Kaisei shinpan Kyōto-ku kumiwake meisho shinzu that is at discussion here (Hashino 2007, 37).

This brings us to 1887, the year that this map was produced. I have established that Aniline dye was known to and used by Japan at this point but exactly how common or how novel would it have been in the year 1887 precisely? Fortunately, the amount of import of different kinds of dye, including Aniline dye, has been recorded and archived. Import was the only reliable source of synthetic dyes in Japan at the time as national production has not yet begun (Hashino 2007, 39-41). With this data, it is possible to answer this answer this question concretely (see Table 1). 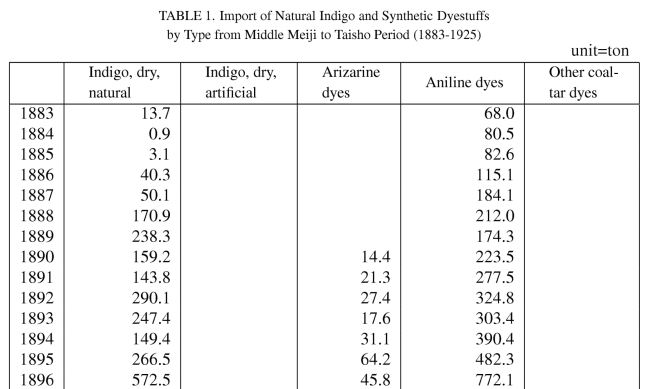 According to these statistics, one can see that despite its fairly early introduction to Japan in 1859, Aniline dye was not or could not be imported in large quantities until the 1880’s. Furthermore, it is precisely in the year 1887, the year the Kaisei shinpan Kyōto-ku kumiwake meisho shinzu was released, that the highest increase in Aniline dye to date was recorded at 184.1 tons, an increase of 69 tons compared to the previous year. A higher increase did not occur until 1894.

Judging by this, it appears that in the year 1887, Aniline dye was still a fairly novel product, the excitement for which resulting in high demand. So maybe the joking analogy of the middle-schooler trying out their new highlighter in excitement was not all that far off from reality. Kazatsuki Shōzaemon, and Kabai Tatsunoshin were not middle-schoolers, however, it appears as though they have found themselves in the same situation of having a novel and exciting new form of colouring that they were eager to use, possibly in excess.

Undoubtedly, these maps of Kyōto, like any of the items in the Rare Books and Special Collections repertoire, provide countless of fascinating grounds for further studies and scholarly work, the usage and evolution of dyes only being one of them. This brief discussion of dye goes to demonstrate a fundamental insight regarding the study of maps: It is this kind of close observation of maps and every aspect of them that reveal the deeper relevance of them for educating about larger aspects of a culture such as the economy, history, society, politics, or the development of technologies. One would be gravely incorrect, therefore, to assume that maps are only records of geography, cartography, or my house in the ancient capital.

Parmal, Pamela A., 2004. “The Impact of Synthetic Dyes on the Luxury Textiles of Meiji Japan.” Textile Society of America Symposium Proceedings. 397-405.