As the most representative image of Japan, Mountain Fuji refers to “symbol of the Japanese soul” As the highest mountain in Japan with its elegant conical form, has become famous throughout the world and is considered the sacred symbol of Japan. Originally, the mountain’s name is uncertain and it first appears as Fuji no Yama in Hitachi no kunifudoki. According to record, the image of Fuji Mountain has been reproduced countless time in Japanese art, the painting, calligraphy or decorative visual arts produced in Japan over the centuries. Mountain Fuji played significant roles in the development of Japan through presenting national culture and religion. Every summer, there are thousands of Japanese climb to the shrine on its peak since they regard “climbing Fuji as a religious practice”(p.53.)

“Dai Nihon Fujisan zetchō no zu” was published in 1857 (Tokukawa period). This was the full version of the Fuji Mountain view and in the middle area is the crater of the Mountain Fuji, on the side of the mountain there are many climbing paths were distributed, the climbing path of the mountain was constructed in order to help climber to walk easier. Every mountain hill has its own name which was labeled through the red color. There are also torii gates located on the top of the mountain, which is for people to do worship. Thus, the trend of climbing Fuji Mountain are more popularize in the commoner group in Edo period, since before that time, only nobility were permitted to visit the peak of Mountain and to celebrate ritual ceremony. In the middle of Edo period, the majority of farmers and businessmen would dedicate themselves to religious activities in order to achieve their dreams. They usually dress up with all white shirts, wear a bamboo hat and shaking bells with their hands and they also need to perform songs or scriptures while they are climbing up the mountain. The purpose of performing songs or scriptures is due to pray for supplication. One interesting thing is before people to climb up the mountain, they need to shower for a week in order to maintain their body and spirit in a pure mood. People were required to obtain a devout heart so that they could overcome all difficulties on the way they apparently can climb up the mountain.

Two significant factors about the development of the Fuji Mountain are; the reverence feeling of the Fuji Mountain, the reverence feeling of the natural landscape. Fuji Mountain had been always played significant roles over the decades of Japanese history. Based on the records of Shoku Nihonggi『続日本記』which is an imperially commissioned Japanese history text that has mentioned that “駿河国言、富士山下雨灰、灰之所及、木彫萎” by translation it is saying that as long as rain dust drops from the Fuji Mountain, all the plants would perish because of the rain dust from the Fuji Mountain. Wherever the dust drop on and it would destroy the greenery. Based on the map of Fuji Mountain, there are many rest stations distributed on the map. For example, almost every stage has a rest station which not only for people to take a break but it also implies them to walk slowly and think about their life carefully. There are many food vendors are located on the mountain as well in order to provide food and energy backup for all the climbers. The routes of the Fuji Mountain were divided into different stages and label them by numbers such as “the fist stage”. Meanwhile, the reinforce concrete wall is on the side of the mountain which is to prevent the landslide.

Reasons that why people in Edo Period are in possession of climbing Fuji Mountain is due to Asama Shrine, which is a shrine of faith mainly to Mountain Fuji. The purpose is to praise the God of the Asama Shrine. In the early time of Japan, Buddhism was drawn into the Japanese history, though some Chinese sources place the first spreading of the religion earlier during the Confucian period and Buddhism has played a significance role influence on the development of Japanese society and maintains its influential culture until today. However, Japanese still maintain their identity beliefs such as Shintoism. People who live nearby the mountain used to always worry about the volcanic eruption and they cannot live a peaceful life. So that they begin to stage some ritual activities in order to pray for protection from the god. One of the most important factors for the faith of the Mountain Fuji was due to people always obtained a great reverence for the natural world. 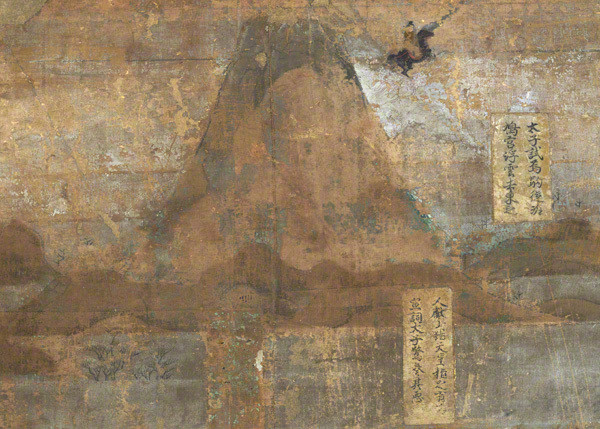 There are also some artworks that involved Mountain Fuji such as Pictorial Biography of Prince Shōtoku. The Prince Shōtoku who was the first person compose Japan’s first constitution and obtain high reputation and admiration in the historical of Japan. In the Pre-Edo Period, there is a tale about Prince Shōtoku jumping up to the Fuji Mountain by riding a mythical horse, and this biographical picture reveals partially deed that Prince Shōtoku’s contribution during his entire life, the biography was mainly recorded all his contribution. Also, this picture is the first picture in the historical point of view to mention about Mountain Fuji.Based on the Pre-Edo period works, as we can see the culture phenomenon of Fuji Mountain has not been formed yet, at that time Mountain Fuji is just for people to worship and praise. We can find a lot of artworks about Fuji Mountain. 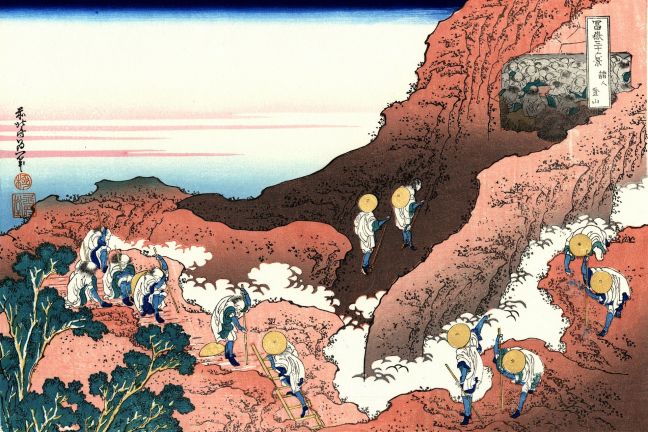 For example, Group of Mountain Climbers; the first fujizuka was established by members of a group known as a Fuji kō, which is an association dedicated to the ascent of Mount Fuji as the religious practice. Each Fuji kō raise funds to donation annual pilgrimages in which one-fifth to one-third of the members would participate, thus by the end of three to five years all of the members would have completed the climb at least once. Since these short trips were religious in nature, members would first visit Sengen Shrine at the foot of the mountain and perform ablutions. Then they climb the mountain in the white clothes of religious ascetics and pay respect at the shrine at the top of the mountain. After that, the group would descend along a different route to one of the towns at the foot of the mountain, where they would enjoy food, drink, and entertainment. With a group of 20 or 30 pilgrims, a professional guide, and a set itinerary that included lodgings, these trips might be regarded as the Edo-period equivalent of today’s package tours.

In conclusion, Mountain Fuji played a significant role in the history of Japan since it has always been dedicating into the artworks and literature filed. As one of the most representative landscapes of Japan, Mount Fuji also obtains higher reputation around the world. Not only because it has splendid view of the landscape but it also becomes to cultural heritage.