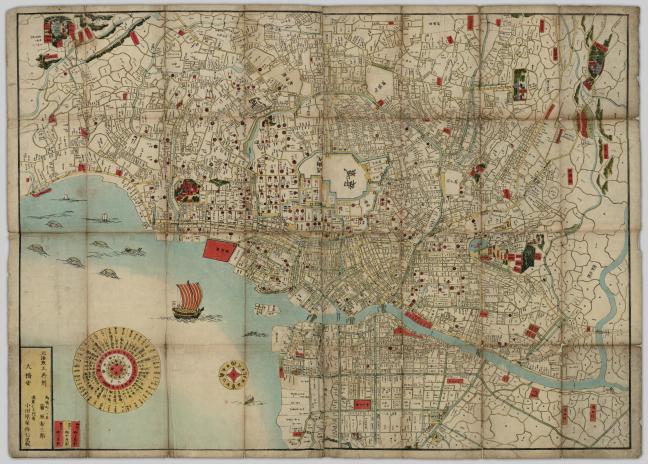 The Edo no zu, also called as the Map of Edo which was created by Kōzaburō Kikuya in 1864 (Kikuya, 1864). In this map, it recorded the directions of the roads, castles, temples, and the shape of the moat or ocean found during the Edo period. On the map, one of the castles set in the center was indicated by two sets of kanji: “Oshiro” (castle 御城) and “nishinomaru”(西御丸). The Edo period, also called as the Tokugawa period and the pre-modern Japan. It had a long history and played an important historical role in Japan. It was created by Tokugawa Ieyasu. He moved in to the Edo castle. Also, he was the founder and first shogun of the Tokugawa shogunate of Japan, which effectively ruled Japan from the Battle of Sekigahara in 1600 until the Meiji Restoration in 1868. When he unified Japan, he created the government of Bakufu.

Under the rule of the Tokugawa shougunate, Edo grew and expanded into a major city. For this reason, Edo’s development was stable. This leads the society and the population grew rapidly. This also influenced the city planning feature in the Edo period. After the Meiji Restoration in 1868, Edo was chosen to be the new capital of Japan and was renamed as Tokyo. This paper will discuss the unique features which were from the Edo no zu, includes the shape of moat, the housing planning/ city planning and the mons, to name a few, which were showing in the map.

First, the shape of the moat was one of the unique characteristic in the Edo no zu. In this map, it used the light blue color to tell the readers about the location of the ocean and the moat. Also, it spreads all over the city. Upon close inspection of the map, it is clear that the moats extend outward from the center of the map where the Edo castle is located. It spread out in a spiral form and in clockwise. “The daimyo’s castle was the most important feature, and was generally well fortified and surrounded by a moat (Sorensen, 2002, p.22).” During city planning and “urbanization,” the government uses moats and rivers as the markers or landmarks to separate different districts within the castle towns. However, the shape of moat which was in spiral form to extend outward from the center of the Edo castle, it did not influence the city development.

The final unique feature of the map was about many small symbols which were marked by red dots. These red symbols were mon, or known as the clan symbols. They are also called kamon (family crest 家紋). They had different shapes and designs. Most of the symbols were focus in the center of the city, which shows the distributions of clan in the city.

“Kamon refers to a crest used in Japan to indicate one’s origins; that is, one’s family lineage, blood line, ancestry and status from ancient times (Kamon Symbols of Japan).” Japan has more than 20000 distinct individual Kamon. Kamon is a unique culture and tradition in Japan. A kamon was created to serve as a unique emblem that represented a family’s identity. Everyone should know about the sengoku period. In that period, all shoguns were having their own family crest, because the family crests can represent their family identity, such as Oda nobunaga, Toyotomi Hideyoshi and Tokugawa Ieyasu. Those three shoguns who unified Japan. However, during the peaceful, tranquil, rather uneventful, Edo period, there were few hard battles fought among samurai so, the former practical role of Kamon, such as; distinguishing friend from foe in battle, had changed to be a kind of symbol of authority (Kamon Symbols of Japan). In Edo period, Kamon was used to show others the social status of the family and determine the social status and descent of others.

However, one of the kamon in the Edo period one must know, that was Tokugawa clan’s family crest, also called Matsudaira clan mon. The crest’s calls ‘mitsubaaoi’. This clan was a Japanese samurai clan. When the main Matsudaira line experienced a meteoric rise to success during the direction of Matsudaira Motoyasu, he changed his name to Tokugawa Ieyasu and became the first Tokugawa shogun. Then he formed the Tokugawa clan. However, the branches retained the Matsudaira’s name. Some of them were in daimyo status.

In addition, we can see many different clan’s crests or daimyo’s crests in the Edo no zu, such as Takeda clan, Imakawa clan, Matsudaira clan, Katakura clan and so on. Also we can see the government of Bakufu which was using the family crests to classify the social level. According to the Edo-Tokyo Transition: in Search of Common Ground (Smith, 2014), it says that the social hierarchy was very important for the citizen who were living in Edo. The daimyos could say that they were in the elite class and they also had a higher social level. In order to classify the daimyo class, the map had already marked the houses which belonged to Daimyos in red dots. From the map, theses dots show that the houses of daimyos are rather big in size. Their housing density were low. Most of the daimyos lived near the castle, because that could be more convenient for their works, and they could go to the Edo castle to meet Shogun easily. In contrast, the other lower classes citizens did not have too much power, so they had to live far away from the Edo castle. Therefore, we can understand the Edo castle, which symbolizes the highest power and highest social hierarchy, was located at the center of the city and holds the most prominent position on the map.

In 1868, the Meiji Restoration took over the Edo, so the Edo Bakufu had finished its 264 years’ domination. ”As a center for concentration of human activities, convenient accessibility to other areas was one of the most significant factors in selecting the site of a city and to allow the possibility of future expansion into a large urban settlement (Ichikawa, 1994, p. 193).” Since then, Edo is renamed as Tokyo, and it keeps developing to be a popular city till today.

Sorensen, A. (2002). The Making of Urban Japan: Cities and Planning from Edo to the Twenty-First Century. New York: Routledge. Accessed from http://lib.myilibrary.com.ezproxy.library.ubc.ca/Open.aspx?id=13794